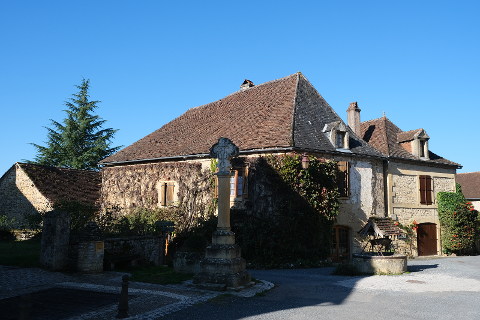 Fanlac is a lovely little village just 7km from Montignac and the Lascaux Caves. Strangely enough I had never heard of Fanlac before but it turns out to be the village where Jacquou le Croquant grew up and was the location for the Jacquou le Croquant television series. More recently(2007) the film has been released and proved very popular in France.

Fanlac is a very attractive village, one of those where if you were offered the chance to live in any of the houses you just wouldn't know which one to pick as they are all so attractive. Built of the lovely golden Dordogne stone and many roofed in 'lauzes', a stone roof tile which whilst once quite common in the area is becoming very rare.

In the centre of the village is a 12th century fortified church. There is also a 12th century cross and a well both adding to the charm of the centre. The Presbytere next to the church is the home of the fictional Jacquou le Croquant figure after he is rescued by the curé Bonnai.

Walking round the village there are some lovely pigeonniers to see and almost every house seems to have a letter box in the form of a little round stone cabanes, even the main village post box!

On a sad note there is a barn in the village which was the site of a brutal attack by Nazis of the Brehmer division. For having harbored members of the resistance, 71 year old Jeanne Aubarbier and 77 year old Gabriel Aubarbier were sexually assaulted, beaten to death and burnt on the 30 March 1944.

Jacquou le Croquant is a novel by Eugene Le Roy which is set in the Perigord and specifically around Fanlac and the Chateau de l'Herm in 1815. Jacquou is born to a servant in the household of the evil Count of Nansac. Following his father's imprisonment and death at the hands of the Count, Jacquou is forced to flee and at death's door is rescued by the curé Bonnai and brought up as an altar boy. Various confrontations between Jacquou and the Count follow with Jacquou eventually defeating the count and his injustices. In 2007 it was made into a very popular French movie and won 2 cesars.

Place to visit near Fanlac

The chateau de L'Herm was built in the 15th century. It fell into ruin after a crime was committed there and is now in the process of restoration. It can be visited between the beginning of April and 11 November. The chateau de l'Herm was the birthplace of Jacquou in the book.

Map of Fanlac and places to visit

Places to visit near Fanlac 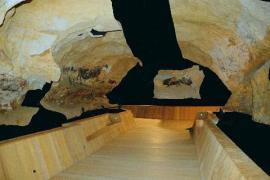 The Le-Thot is a museum of prehistory and has reproductions of cave paintings from Lascaux. 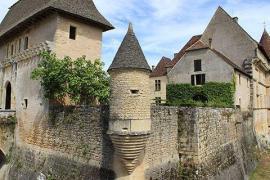 A Renaissance castle built inside medieval walls and with a charming garden.

Montignac is a lovely riverside village and home to the Lascaux caves.

The Lascaux caves are filled with awesome prehistoric paintings. 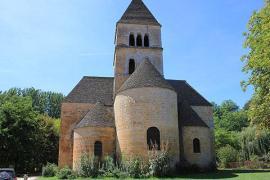 Saint Leon sur Vezere is one of the most beautiful villages of France.